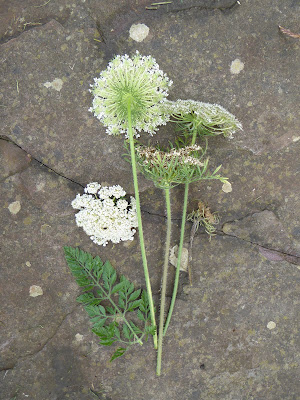 Queen Anne's Lace, Daucus carota or Wild Carrot is one of those seasonal plants with white umbrellas of flowers that appear by the wayside in summer. I have often seen pictures on blogs posted by natural dyers and of course, read about dyeing with it in Jenny Dean' s book, Wild Colour. For years, I have been exasperating my companion by interrupting our walks to examine tall stems with the right sort of white flowers, only to find the large leaves of yet another Hogweed plant or the divided leaf lobes of Cow Parsley. Last year, I really thought I had discovered exactly the right flowers and leaves, only the stems they were attached to were smooth and mottled, rather than green and hairy. 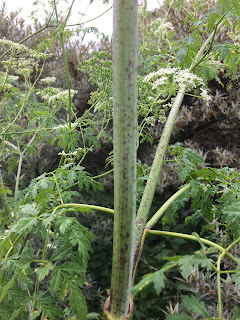 "Don't pick that if you want to keep body and soul together, Beaut." My companion held me back with a firm hoof.
"Elinor, I know you're keen to get down to the beach, but I'll only be a minute."
"You are not carrying those plants around, they're Poison Hemlock. Or if you do, you can pass me the picnic basket. Plato wrote about how philosophically Socrates drank the cup of hemlock that condemned him to death, but I'm just a hedonist looking forward to a flask of tea by the sea."
"This is really hemlock?"
"Don't take my word for it. Go ahead and pick some. It's all very noble, you and Socrates, ready to cast off the things of the flesh, dyeing to seek the truth of the eternal, but personally, I'm with Bertrand Russell."
"What's he got to do with anything?"
"To paraphrase, he said 'I would never dye for my beliefs, because I might be wrong'."
I was appalled.
"Bloody hell, an accidental hemlock dye bath could have been the end of me. I'm not ready to die for a yellow I could get from lots of other plants, I'll play it safe, this foraging isn't worth the risk."

As we walked on, our conversation turned to the pleasures of the flesh and their relative dangers.
"What's in the sandwiches, then, Beaut?"
"Cheese and cucumber or egg and cress."
"Fair play, sounds better than sex."
"I suppose a hundred years ago, women would have thought the sandwich option was much less risky."
"What, you think enjoying their egg and cress was preferable to the chance of becoming an unmarried mother and getting sent away or locked up in a lunatic asylum?"
"Always so dramatic. I just meant that in the past, sex carried the risk of an unwanted pregnancy. The appeal of cheese and cucumber sandwiches could only have been enhanced by the absence of contraception."
"There were other methods before the Pill. Women could have had sex and then eaten their sandwiches with reasonable peace of mind. Herbal contraceptives have been around for thousands of years."
"So have leeches, but doctors don't recommend them any more. I'd imagine you'd be safer taking hormones."
"Plants full of female hormones grow all over the world. In the old herbal remedy books, the real purpose of their decoctions was often hidden behind the label 'emmenagogue' which means something taken to bring on a period."
"If plants had actually prevented pregnancies, surely women wouldn't have just forgotten how to use them."
"Hmm, well, think men and think religion. Emmenagogues wouldn't have been the sort of thing monks grew in the abbey herb garden and dispensed to the locals on demand. If you were twenty years younger and lived a thousand years ago, you might have gone looking for Queen Anne's Lace for very different reasons. Its flowers and seeds are full of hormones. Even today, people try using them like a Morning After Pill." 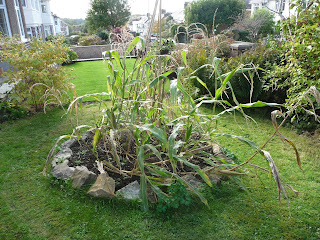 Fascinating stuff. I ordered a packet of Daucus carota seeds online. They were small with tiny spines on them and rather than chew a teaspoonful, I sowed them in a seed tray. Last autumn, although most of the garden went neglected, I did clear out a border in the front garden, where an attempt to grow Hopi Blue Corn had failed to produce one worthwhile cob. 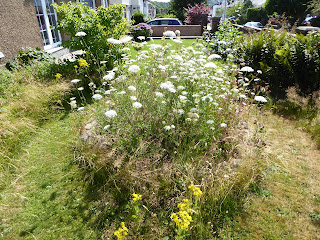 The tray of seedlings got scuffled into the bare earth and were forgotten until this summer, when despite the drought, maybe because of it, Queen Anne's Lace has done wonderfully well. That border has thrived with no special attention, though the 'wild meadow' vibe may not be to everyone's taste. 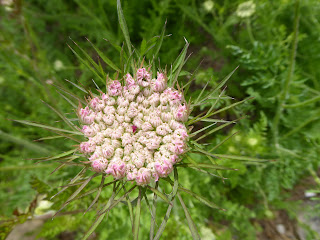 Having watched the plants develop, I now understand that the unopened buds are pink, the characteristic single deep pink floret in each white flowerhead is most apparent when they first open and slowly fades to white like the rest of the flower, before the structure closes up into a cage around the seeds. The feature that identifies this plant most reliably is the elaborate collar of green spikes under each flower. 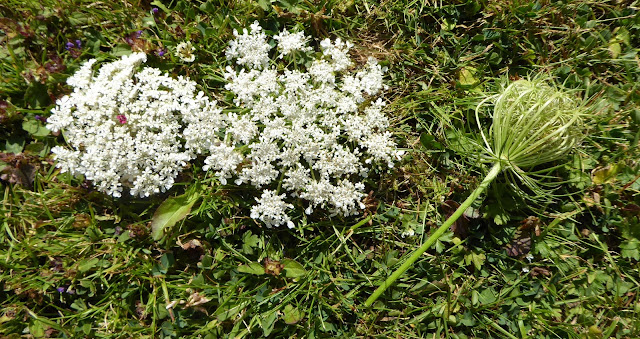 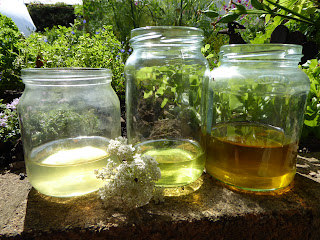 And now, the dye. I simmered 150g of flowerheads in water for an hour and left them overnight. Next day, indicator paper showed the dyebath was naturally acidic at pH 5. The colour of a sample of the dye in a jar looked wishy washy, deepening to yellow with the addition of enough soda ash to bring it up to pH 7 and to gold at pH 9. 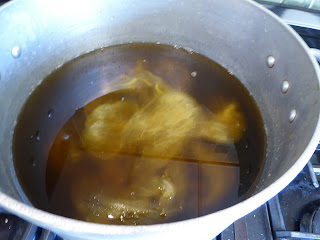 Adding a teaspoon of soda ash to the main dye bath, I simmered three 10g lengths of merino and silk blend wool tops, mordanted with alum. The resulting yellow is shown at the top of the next picture. One length of the tops was modified by heating with iron solution (left) and another was modified with copper (right), neither radically shifted the original colour. 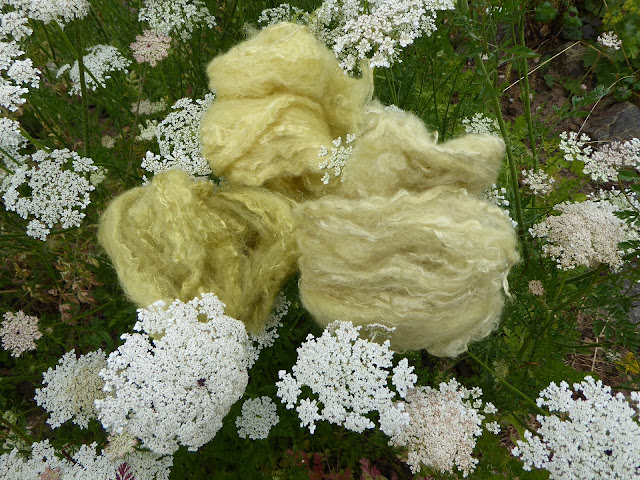 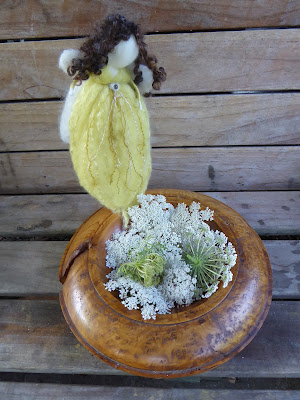 "Think your Queen Anne's Lace dye was worth it then, Beaut?"
"It's just yellow."
"Not better than a sensually rewarding spot of physical intimacy?"
"Possibly not. I think I enjoy the plant and its history and significance more than the dye colour. I'll be collecting seeds next month and I'm going to keep them in this dish."
"Ooo-er, fnah fnah, take my advice and stick to sandwiches."
"Bog off, Elinor. I'm going to sow more Queen Anne's Lace for next year." 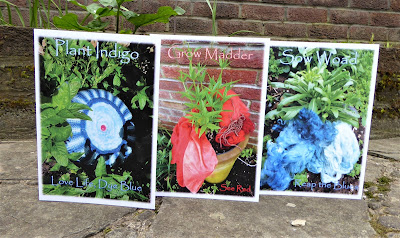